A Chivalrous Prophet, a Rueful Rider and a Working Wife

People feel envy for many reasons, over those things that they see others possess, which they really covet. Envy or “حسد”, as it is called in the Qur’an, is a disease of the heart that manifests itself in the form of many an ugly behavior and word. Sometimes, the envy results in the person who is being envied to even undergo serious harm.

However, this post is not about envy, or rather, not about the destructive envy that we should all avoid feeling because of the blessings that we see another possess. This post is rather about how Prophet Muhammad [صلى الله عليه وسلم] showed his love and concern for some of his companions.

Loving our Prophet and following him is a part of our faith in Allah and the Last Day, and a means of gaining Allah’s love:

“Say: “If you love Allah, then follow me; Allah will love you and forgive you your sins. And Allah is Oft-Forgiving, Oft-Merciful“.” [Quran – 3:31]

More than just providing lip service as a testimony of our love for him, we should focus on ‘walking the talk’, i.e. constantly analyzing ourselves to see whether this love for him that we profess actually makes us emulate him, imitate him, and obey his every command or not, even if this means going against the wishes of our loved ones, our societal norms, or own desires.

Moreover, this love for the Prophet should also make us feel an intense desire to meet him and see him in person, since one favor that his companions had the privilege of possessing, which we can never even hope to do in this worldly life, is the joy of beholding him in flesh and blood before their eyes, talking to him, and being in his company.

Beyond that, of course, is the fortune of the even luckier ones among his companions who were graced with special favors as far as the Prophet [صلى الله عليه وسلم] was concerned – namely, his close friendship, his counsel for problems, day-to-day guidance, and being related to him through matrimonial ties. Usually, his two friends Abu Bakr and Umar [رضى اللهُ عنهما] are mentioned foremost in this regard.

However, there are some other, lesser-mentioned of his companions, who were at the receiving end of his special favor too. A few ahadith that are narrated below describe this special attention dished out by the Prophet of Allah [صلى الله عليه وسلم] towards two of his companions.

Below is the first of those ahadith.

The Prophet [صلى الله عليه وسلم] said these words to his companion Mu’adh Bin Jabal [رضى الله عنه], whom he eventually sent to Yemen during his life, by appointing him as its Governor.

I cannot describe enough how my heart feels whenever I read this hadith!

Can we even imagine the favor that Allah had blessed Mu’adh Bin Jabal with? Think about it some more: the best man in the eyes of Allah expressing his love for this young man in clear, loving, sincere words, on his face – telling him that he loves him! Could anyone be more fortunate; greater in excellence?

Very few, in my opinion.

Below is another narration in which the love of Allah’s Messenger [صلى الله عليه وسلم] for this young companion of his, is openly evident:

When Allah’s Messenger [صلى الله عليه وسلم] sent him to Yemen, he went out with him giving him advice, Mu’adh riding and Allah’s Messenger walking beside his riding beast. Then when he finished he said, “Perhaps, Mu’adh, you may not meet me after this year, but perhaps, you may pass this mosque of mine and my grave.”  Mu’adh wept from grief over the departure of Allah’s Messenger. The Prophet then turned facing Madinah and said, “Those nearest to me are the pious, whoever they are and whenever they  are.” [Mishkat]

As Mu’adh was being sent off to Yemen, he was riding an animal, and the Prophet walked by his side. They both knew that this was the last time they would meet in person. What an emotion-ridden, poignant moment in the lives of two people who loved each other purely for the sake of Allah!

I think it is enough for someone like me to feel a rush of “envy” – if an intense desire for a blessing that is possessed by another can even be labeled ‘envy’ – whenever I read the above ahadith.

First, to have the honor of Allah’s beloved Messenger express his love for you in your life, then to have him see you off as you’re going away to a far off place, and then to have him console you that despite being torn apart by the temporary life of this world, if you remain pious, you would still be among those who are “nearest” to him! If we think for a moment that this was the Prophet of Allah [صلى الله عليه وسلم] seeing off Mu’adh like this, we can not help but feel overwhelmed at the extent of Allah’s favor upon this young companion!

May Allah be pleased with him.

The second hadith that fills me with so-called “envy” is the one in which Asma Bint Abi Bakr [رضى الله عنها] quotes her experience of taking care of her husband’s horse in his absence:

“I got married to Al-Zubayr, and he had no wealth on earth and no slaves, nothing except a camel for bringing water and his horse. I used to feed his horse and bring water, and I used to sew patches on the bucket. I made dough but I was not good at baking bread, so my (female) neighbours among the Ansar used to bake bread for me, and they were sincere women. I used to bring date pits from Al-Zubayr’s land that the Messenger of Allah had given to him, carrying them on my head. This land was two-thirds of a farsakh away.

“One day I came, carrying the date pits on my head, and I met the Messenger of Allah [صلى الله عليه وسلم], who had a group of the Ansar with him. He called me and made his camel kneel down, for me to ride behind him, but I felt too shy to go with the men, and I remembered Al-Zubayr and his jealousy, for he was the most jealous of people. The Messenger of Allah  realized that I felt shy, so he moved on.

“I came to Al-Zubayr and told him, ‘I met the Messenger of Allah when I was carrying date pits on my head, and he had a group of his companions with him. He made his camel kneel down for me to ride with him, but I remembered your jealousy.’

“He said, ‘By Allah, it bothers me more that you have to carry the date pits than that you should ride with him.’” Asma’ said: “After that, Abu Bakr sent me a servant to take care of the horse, and it was as if I had been liberated from slavery.”

I know that this hadith of Asma is very well-known, but for another reason – the superiority of this hard-working Muslim wife who willingly toiled hard to serve her husband. There is no doubt that what she did was very praiseworthy, but that is not the point that draws my attention to this hadith. 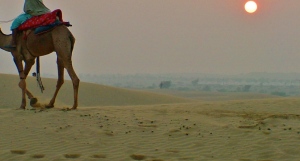 Rather, what makes me dwell on her good fortune is the fact that our Prophet [صلى الله عليه وسلم], when he saw her walking alone, carrying date pits on her head, stopped in his tracks, made his camel kneel down, and offered her a lift home!

We all know that whatever he did was according to the Haqq. And instead of letting her walk back alone carrying her burden, he stopped to make it easy for her.

The same goes for her “jealous” husband. When he heard of the incident, he immediately regretted her having to work so hard to maintain his horse, and expressed his concern for her hard work.

As for her other mahrum, her father, when he heard of this incident, he immediately made her hardship easy by giving her a servant to do this manual work for her. So much so that, in the words of this humble, hardworking wife and daughter (who probably used to hide the difficulty of her hard toil from not just her husband, but also her father): “…it was as if I was liberated from slavery!”

The kind, benign actions of all the three great Muslim men described in this hadith – the Prophet [صلى الله عليه وسلم] (the best of men), Al-Zubayr, and Abu Bakr [رضى اللهُ عنهم] – are proof of the fact that, on witnessing or hearing of Asma’s hard work with her husband’s horse, all three either felt concerned or strove to help relieve her of her task.

Contrast that to some modern-day Muslim men who shove this hadith in their wives’ faces to remind them about how hard they are supposed to work to serve their husbands!

Regardless, this hadith makes me feel so “envious” of Asma Bint Abi Bakr, because she had the honor of having none other than the Prophet of Allah [صلى الله عليه وسلم] stop what he was doing out of concern for her, and to offer her a ride home on his camel. Let us not forget another key point here – that Asma was the daughter of the Prophet’s best friend and close companion, Abu Bakr [رضى اللهُ عنه], and the older sister of his wife, A’ishah. He had close family ties with her, and hence his chivalry becomes even more justified and understandable.

Indeed, she is fortunate to not just be honored because of the Prophet’s concern for her, but also because she had the wisdom and innate shyness (haya) to refuse such an honorable and prestigious offer just for the sake of preventing her husband’s jealousy – which is an indication of her lofty taqwa. What a great woman!

May Allah be pleased with her.

As for us beggars…we can only hope and pray to Allah that He enables us to love His Messenger [صلى الله عليه وسلم] as he should be loved; to emulate, obey and imitate him over and above anyone else – even over the desires of our own selves.

Maybe then, we can hope to be counted among those whom he mentioned in a positive light, expressing his desire to meet them, as is clear in the hadith below:

Anas Bin Malik [رضى الله عنه] narrates that the Messenger of Allah [صلى الله عليه وسلم] said: “I wish that I could meet my brothers.”
The Companions of the Prophet asked, “Are we not your brothers?”
He replied: “You are my Companions, but my brothers are those who will believe in me, without having seen me.”

May Allah guide us to love His Prophet [صلى الله عليه وسلم] so much so that it infuses us with an intense desire to behold him, meet him, and enjoy his company in the Akhirah, guiding us to those righteous actions that can help attain this ultimate culmination of success. Ameen.